Spike Island is an international centre for the development of contemporary art and design in Bristol. 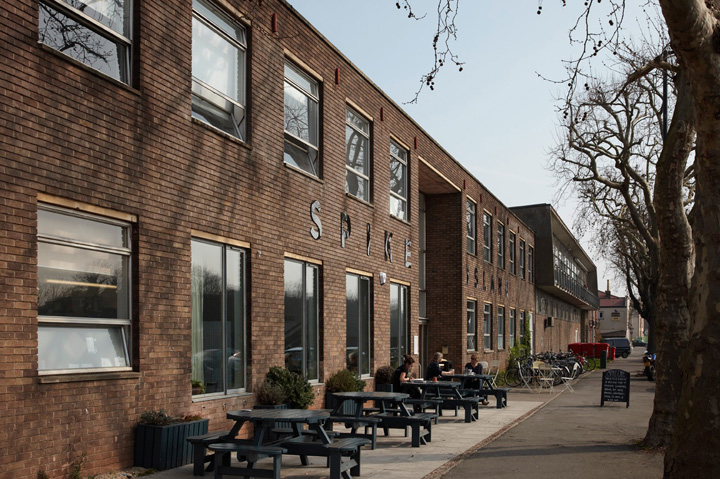 Spike Island is an international centre for the development of contemporary art and design in Bristol. A vibrant hub for production, presentation and debate, their vision is to position art as central to society which they do in two ways: by offering a high quality, challenging programme of exhibitions and events; and by fostering a dynamic and critically engaged community of artists and designers.

Spike Island, formerly Bristol Art Space, began as an artist run initiative in the late 1970’s. In 1996, after ten years of lobbying, the three founding groups of artists Spike Print, Sculpture Shed and Top Floor studios (painters) negotiated a peppercorn 125 year lease on the current premises, an 80,000 ft2 former Brooke Bond tea packing building in the centre of Bristol. The security this lease offered has subsequently allowed them to attract substantial investment, enabling a £2.5 million re-development, led by then Director Lucy Byatt, which was completed in 2006 and saw the creation of a varied and flexible series of facilities that respond to the needs of artists and others developing their careers within the contemporary visual arts. Spike Island receives funding from Arts Council England and Bristol City Council, but generates a substantial proportion of their income from their building.

The complex now houses seventy artists in subsidized studios, twenty five designers in the Spike Design co-working space, thirty five commercial tenants, the University of the West of England’s Fine Art courses, the Spike Associates space and library, large public gallery spaces and a café. They have small, unstaffed metal and wood workshops for tenants use and Spike Film and Video, Spike Print and fabricators Plenderleith Scantlebury are also based within the building as independent entities. Their annual open studio weekend attracts over 7000 members of the public who are able to engage directly with their tenants and their work.