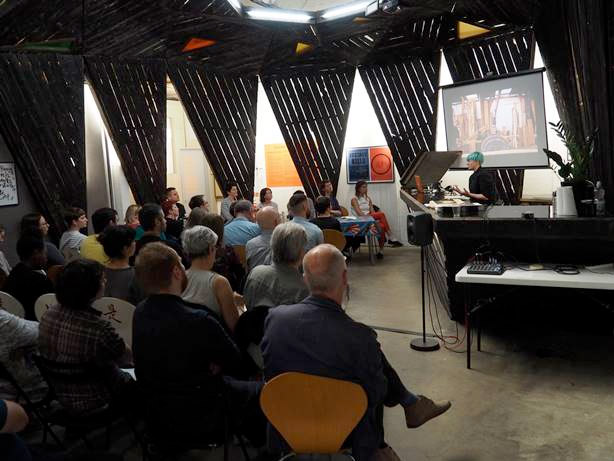 This event was delivered by Workshop Birmingham and Eastside Projects working with the Artist Development programme run by The New Art Gallery Walsall in partnership with Turning Point West Midlands.

An audio recording of the presentations is available here.

Eleanor Morgan is an artist based in London. She is joint award holder of a RIBA Research Trust grant with architect Guan Lee. The aim of their project, Clay Robotics, is to combine traditional clay processes with digital technologies. She is currently Leverhulme Trust artist in residence at the Grant Museum of Zoology, where she is working with their glass sponges – animals that are formed of 90% silica.

Guan Lee is a practicing architect, lecturer, and director of Grymsdyke Farm. He carried out his architectural studies at McGill University in Montreal, the Architectural Association in London, and the Bartlett School of Architecture, where he completed his doctoral studies on the relationship between architectural craft, making and site. In addition to his long experience as an educator, in his own practice he explores digital fabrication in conjunction with hands-on building processes using a range of materials, including clay, concrete and plaster.

Fran Edgerley is a member of Assemble, an art and architecture collective based in London. Assemble’s working practice seeks to address the typical disconnection between the public and the process by which places are made. Their projects have been critically recognised as a challenge to both contemporary participatory practice and dominant modes of producing and consuming architecture. Assemble was awarded ICON magazine’s Emerging Architecture Practice of the Year 2014 and was recently nominated for the Turner Prize 2015.

Linda Brothwell is renowned for initiating a repair movement in the arts. She was shortlisted for Design of the Year in 2009 for her work in Lisbon at Experimenta Biennale titled ‘Bench Repair Project’ and was awarded the Jerwood Makers Open in 2013 for ‘Acts of Care: The Sheffield Edition’. She is currently pioneering a new understanding of the significance of British crafts skills and tools illustrating the importance of their value to economic, social and cultural development.

Fi Scott is a manufacturing geek, designer & founder of Make Works. Make Works are factory finders for designers and makers, on a mission to make local manufacturing inspiring and accessible. Make Works spend their days discovering the hundreds of local manufacturers, open workshops, factories and makers that are all too often hidden away in industrial estates and have created a digital platform which makes it easy to access practical fabrication services online.

Nicolas Deshayes is a sculptor who uses materials such as anodised aluminium and vacuum-formed-plastic to explore industrial processes. Despite their production, his works maintain an organic or human-like quality that belies the synthetic materials they are created from. Deshayes’ work represents a joy in material; it situates malleable, natural forms against the slick plasticity of many of today’s industrial products. In doing so, it offers a purposeful contradiction between the permanence of the materials used, and the corporeality and destructibility of the natural world.